Tickets are sold on site SEK 180

During concerts we sell soup on kajp, hot dogs as well as pasterys and drinks.

Depending on the Public Health Agency’s restrictions, this summer’s plans will be displayed close to each event.

We keep the café open between 11-16 all weekend during Ascension Day.

A warm welcome to self-picking tulips in our beautiful flower garden!

During Saturday-Monday between 12 am – 5 pm Liste Café has The theme  – “A cookie for all!”. We offer a wide selection of home-made cookies. Vegan, gluten-free, dairy- and lactose-free, etc.

We will also serve our tasty Kajpsoup. 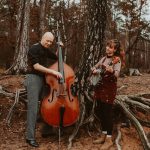 Stereo Naked: a bass, a banjo, vocal harmonies. Restlessness and soul. Julia Zech and Pierce Black have made themselves at home on the road, tallying up a marathon’s worth of concerts and tours since releasing their Debut Album “Roadkill Highway”. The mixture of Folk and Indie in their music paints a dappled scene: here, feminine charm mingles with a dash of dark cynicism, while yodeling odes tell tales of uncertain love and there’s a simple honesty to it all.

No filter: that’s exactly how these two artist are and how they sound. 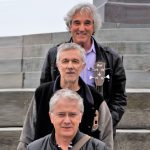 Something has happened to FJK. Admittedly, these true musicians have been interplaying, playful and very much alive on stage, but there is a new glow in the band! This may be because all three now play a lot with others, which brings inspiration to the work in FJK.

This, combined with an ever deeper friendship, dating back almost 40 years, makes the trio function as a unit where everyone complements each other, responsively as never before. The writing has also received a new ignition and autumn usually begins with a writing week in the Stockholm archipelago. You come with glossy paper and return home with new music. Could it be better?

In the city of Nashville, filled with country cowboys and songwriters, Adrian + Meredith sets another type of roots. Their debut record, “More Than A Little”, sets their own spin on American music and picks up the sounds with Punk’s groundbreaking spirit, vintage music on folk music, the snow on rock & roll and the frenetic bounce of early swing music.

Adrian grew up in underground punk music in Washington DC, with a unique approach to acoustic guitar. Meanwhile, in Michigan, Meredith taught old music and traditional clogging festivals. Since then, the pair have been relentless, exchanging harmonies, trading solos and co-pilots throughout their debut album and American and European tours.